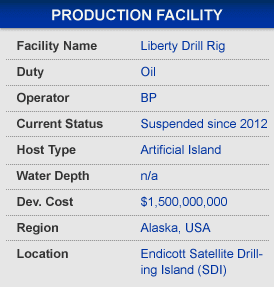 The Liberty field is located in shallow water (20 feet) inside the Beaufort Sea’s barrier islands. It was planned that the project would take advantage of existing infrastructure in the BP-operated Endicott oil field, which was producing oil since 1987. BP planned to reach Liberty’s oil reservoir, about six miles east of Endicott, using state-of-the-art, extended-reach wells.

The wells were to be drilled from Endicott’s Satellite Drilling Island, which was expanded for drilling operations. Producing the oil through these long-reach wells would eliminate the need for a new drilling island and subsea oil pipeline. Initial production was expected in 2011, and by 2013 BP anticipated the Liberty field would yield about 40,000 barrels a day. 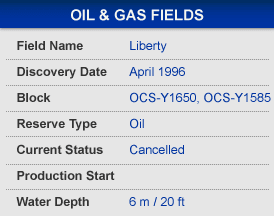 British Petroleum’s (BP) Liberty offshore oilfield is located four miles off the northern coast of Alaska in Foggy Island Bay in the Beaufort Sea. The estimated recoverable reserves of the oilfield are approximately 100 million barrels of oil and 78 billion cubic feet of natural gas. The oilfield is expected to produce more than 40,000bpd.

The project was originally scheduled to start production in 2011 with development drilling commencing towards the end of 2010. The project has come under criticism following BP’s Deepwater Horizon explosion in the Gulf of Mexico.

There are no reviews yet.